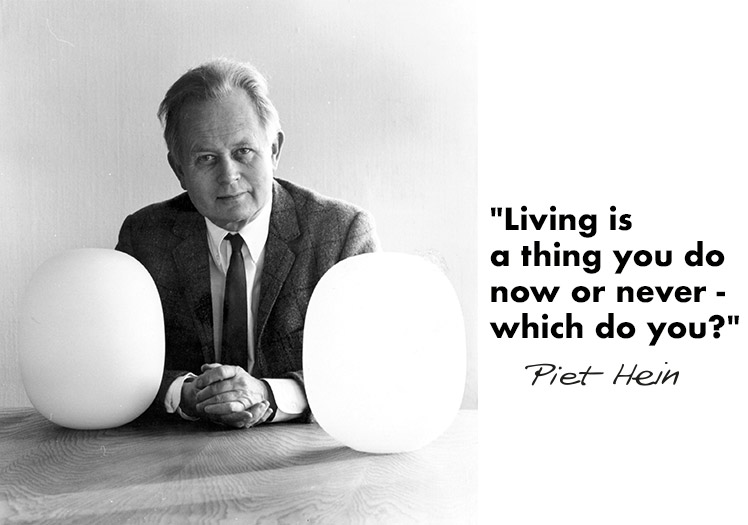 Piet Hein (1905 –1996) was born in Copenhagen as the son to an engineer and an ophthalmologist. He studied philosophy at the University of Copenhagen, he was a student at the Royal Swedish Academy of Fine Arts in Stockholm and he studied theoretical physics at the Technological University and at the Niels Bohr Institute. He chose his own course in life and is often cited as a modern polymath. He had a remarkable circle of acquaintances such as the comedian Charlie Chaplin and scientists such as Albert Einstein and Niels Bohr. These close friendships were an important source of inspiration in Piet Hein’s life.

Piet Hein was a man of eclectic talents: a mathematician, scientist, a designer, and a poet – he strongly believed in the synergy between these skills. This characterizes his style of expression in language and material, turning design into art.

He explained his way of working:

“Art is solution to problems which cannot be formulated clearly before they have been solved”.

As a poet Piet Hein wrote numerous short poems, known as “grooks”. More than 7,000 in total which have been published in 20 volumes and translated into multiple languages. In a grook (Danish: gruk), Piet Hein presents the reader poems about life, culture and society in a light and epigrammatic style. It was a way for Piet Hein to express his observations with a pointed pen and impenetrable charm which made him dear to many.

As a mathematician, Piet Hein has defied the contrast between the circle and the square and between the ellipse and the rectangle with the Superellipse®. A unique shape which has made it’s way into everything from urban planning to furniture.

The Superellipse® solved a traffic problem at Sergels Torg in central Stockholm in a modern and harmonic way. Whilst Stockholm’s infrastructure was quite rectangular it needed a traffic loop to enable flow. When squares or circles could not deliver, Piet Hein saw an opportunity. The solution quickly became successful and the Superellipse® made way into other countries within the areas of architecture and design. Today we can see the popularity of the Superellipse® in tabletops and other interior products but also in planning of city landscapes or sport centres.We get to experience a glimpse of Piet Heins geniality in a remarkable game he invented: the Soma Cube. With seven irregular pieces the goal is to assemble it into a cube. There are 240 ways to do it and Piet Hein wrote:

“It is a beautiful freak of nature that the seven simplest irregular combinations of cubes can form a cube again. Variety growing out of unity returns to unity. It is the world’s smallest philosophical system.” 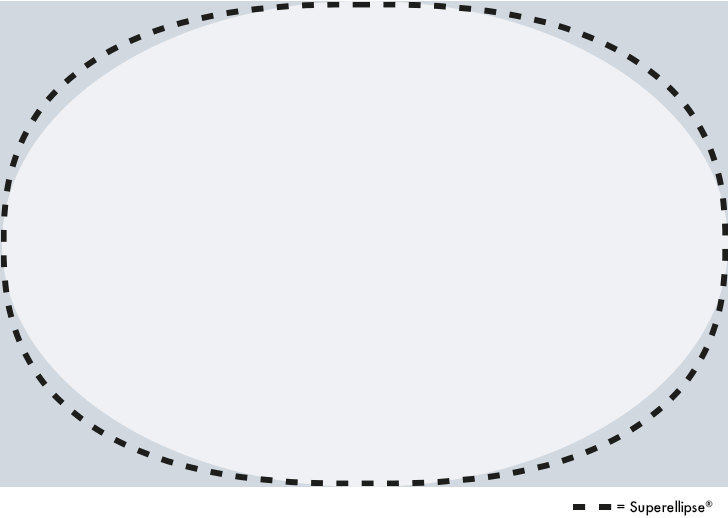 Almedahls offers complete textile solutions for public and private spaces. We design and manufacture most of our products in Sweden as we have done for the past 175 years.

This website uses cookies to improve your experience while you navigate through the website. Out of these cookies, the cookies that are categorized as necessary are stored on your browser as they are essential for the working of basic functionalities of the website. We also use third-party cookies that help us analyze and understand how you use this website. These cookies will be stored in your browser only with your consent. You also have the option to opt-out of these cookies. But opting out of some of these cookies may have an effect on your browsing experience.
Necessary Always Enabled
Necessary cookies are absolutely essential for the website to function properly. This category only includes cookies that ensures basic functionalities and security features of the website. These cookies do not store any personal information.
Non-necessary
Any cookies that may not be particularly necessary for the website to function and is used specifically to collect user personal data via analytics, ads, other embedded contents are termed as non-necessary cookies. It is mandatory to procure user consent prior to running these cookies on your website.
SAVE & ACCEPT